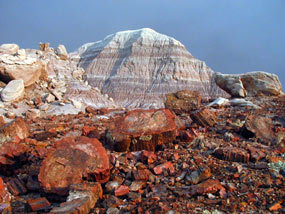 Though it may seem an arbitrary question, we really cannot delve into anything else, nor even have Blue Marble Adventure GeoTourism, LLC exist without discussing something vital.  What actually is geology?  By dissecting the Greek roots of the name, we can gather geo (Earth) and logy (the study of something) translates literally to “the study of the Earth”.  What does this mean?  It seems wildly general and somewhat ridiculous.

The truth is that geology is, in fact, the comprehensive science of everything.  It includes physics, chemistry, biology, and mathematics.  Geologists must possess a fundamental understanding of each of these, and draw upon that knowledge along with observation to deduce an historical account of why everything looks the way that it does.  To be a geologist is to be a scientist, a historian, a puzzle builder, an explorer, and a steward of the Earth and cosmos.

In its most pure form, geology is the study of rocks.  Where did they come from, how did they get here, and why do they look the way they do?  These are all questions that are constantly in the mind of a geologist such that an easy dayhike to anyone else is an opportunity to learn about the historical evolution of the area.  Geologists examine rocks from the ground up (no pun intended) to deduce its history starting from its building blocks, the minerals within.  The mineral composition, alignment, grain sizes, and various other physical and chemical characteristics can help a geologist determine what a rock is, then allows them to deduce the entire history of that rock and thereby the region from whence it came.

(Want a more in depth look at the birth of modern geology?  Read The Goat’s take at http://www.bluemarblegoat.blogspot.com)

From these most humble of origins, geologists have begun to unravel the mysteries of the creation of the Earth some 4.6 billion years ago until now.  From the accretion of the Earth to the present-day Anthropocene, the crust has rearranged itself into three different supercontinents, life begun and species have evolved, glaciers have come and gone, massive volcanoes have cataclysmically erupted, meteors have bombarded, and all of these wonderfully apocalyptic happenings have been recorded by the rocks that they created.

The answer to many of the questions as to why we are here and where we might be going is contained within the rock record waiting to be discovered.  Whether you set out to discover them yourselves, or whether to go guided by us here at Blue Marble, we can answer any of the questions that may nip at your existential ankles.  Ask a geologist, it will always be a great story!

Photo Courtesy of The Goat, Banded Gneiss Near Durango, CO

For More about geology and all things adventure Follow The Goat