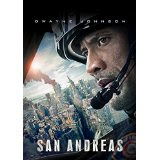 Care to see the full rankings?  Check this out!

Though this meter is obviously subjective and somewhat vague and arbitrary, it does bear some explaining.  Basically, the more hyperbole in the rating, the more egregious the sins against science.  Pretty simple I suppose.  The Apocalyptic sin meter rating for this movie indicates that there are numerous accounts of phony science and, in many cases, flat-out nonsense.  Now let’s get to it.

Here is how I will break down each of these movies:  I will begin by putting forth the geology that is addressed in the movie and give some general background.  Then, I will address each geologic occurence/question/theory/etc. in each of these movies and explain/discredit/endorse its validity.  I may use some terminology that is not layman, but I will do my best to keep it relatively simple.

This movie is based on the idea that a heretofore unseen earthquake of magnitude 9.6 (Richter Scale) occurs along the famous San Andreas Fault in California.  The fault and its system at-large is a strike-slip system, meaning that its motion is lateral as oppose to up and down that you might find in a subduction zone.  It runs roughly from the Gulf of California and the Baja Peninsula to its end in the ocean north of San Francisco about 0.5 miles offshore (figure 1).

It has been responsible for several large earthquakes, including a 9.1M that struck San Francisco in 1906 that resulted in the near total destruction of the largely wood-built city.  It also famously slipped during game 3 of the 1989 World Series between the A’s and Giants at a 7.5M, resulting in the structural failure of several bridges in the Bay Area, as well as billions of dollars in damage.

Faults occur along weakness in the lithosphere (crust) that allows the crust to move and slide along planes.  Faults are particularly likely to exist where tectonic plates are converging, diverging, or transforming.  Since the Earth’s tectonic plates are in constant motion, thousands of earthquakes occur each day all over the world, though the vast, vast majority are too small to detect by anything but seismic equipment.

What is the San Andreas Fault?

The San Andreas fault system is the child of the North American and Pacific tectonic plates that are moving in opposition to one another along their boundaries in the southern California region (figure 2).

This motion causes the plates to grind against one another.  Pressure builds at certain points along the system and when the point can no longer withstand the pressure, it gives causing energy to be released radiating in concentric circles from the point.  These waves of energy are what cause earthquakes, and are called S-waves and P-waves.  The P, or body waves, arrive first and are the marker for seismographs.  S-waves arrive shortly thereafter, and cause the ground to shake perpendicular to the motion of the wave.

The largest earthquake to ever be recorded was a 9.5M off the coast of Chile in 1960 (this fact is given to the audience in the movie).  This occurred in a subduction zone, where the Pacific plate is “ducking under” the South American plate causing pressure to build.  These zones can cause particularly catastrophic earthquakes.  Though the San Andreas has produced a 9.1M, it is theorized that it is unlikely that a 9.5M or greater could occur.

Could a 9.6M earthquake occur along the San Andreas fault system?

The short answer is theoretically yes, but it has never been recorded by seismographs, nor in the rock record where geologists can study fault zones and rocks deformed by earthquakes to measure the stress placed on the rock.  This does not mean it could never happen, but most models predict that the most powerful earthquake the San Andreas system could produce is roughly a 9.2M, which is still cataclysmic, but not nearly as devastating as the earthquake in the movie.

Could a 7.5M earthquake occur at Hoover Dam?

In the movie, the precursor to “the big one” comes in the form of an earthquake that destroys the Hoover Dam, quite spectacularly I might add.  The short answer here, is likely no.  Though there are faults in the area of the dam, none of them has the capacity to build and release the energy for a 7.5M EQ.  Rest easy dam-goers, you should be okay.  In addition, any structural engineer will tell you that the Dam would not buckle so easily as it did in the movie should such an event occur.

Can seismologists predict earthquakes with 100% certainty?

The answer here:  In short, hell no.  In the movie, Paul Giamatti’s character has created software that uses seismic pulses to predict with 100% analytical certainty that an earthquake will occur, and even goes so far as to claim that they can predict the location of the epicenter, and the magnitude on the impending quake.

Frankly, this notion is laughable.  Any geologist who tells you they can predict earthquakes or volcanic eruptions with any absolute certainty is selling snake oil.  The Earth is a dynamic living thing, and predicting its actions with any degree of certainty is like predicting what a teenager might do while driving a vehicle.  You can monitor, theorize, gather data, poke, prod, bother, and vex, but you cannot ultimately say with any absolute surety what is going to happen once they get behind the wheel.

Would a quake along the San Andreas open up long canyons, exposing the fault line?

Once again, in short, not a chance.  This goes back to the type of fault the San Andreas is, a strike-slip.  This motion is lateral.  For a canyon to open, such as one in the movie, the Pacific and North American plates would have to suddenly begin to shift away from each other, resulting in a divergent plate boundary, that may then open up a gaping chasm in the Earth.  It is a cool visual effect in the movie, but violates fundamental geologic laws of motion.

A quake of magnitude 9.5 would certainly leave its scars on the surface, just not a gaping canyon.

Would skyscrapers liquefy in the presence of a quake of this magnitude?

Although the destruction would be massive, and the damage horrific, it is highly unlikely that structures such as the TransAmerica Tower would suffer the fate they did in the movie.  In fact, many of the skyscrapers in San Francisco may be some of the safest places you could be in a quake.  They are engineered specifically to “sway” with the motion of the quake.  For a moment. imagine San Francisco is built of Jell-O on a table.  Shake the table as violently as you can, and it is likely that the Jell-O, though it will show some signs of damage, will still be standing.  These are the same principles that went into the engineering of most of the modern structures in the city.

In short, no, this would not happen.

Once again, my answer here is short and sweet:  Absolutely not a chance.

The San Andreas, in addition to being strike-slip which would not displace the amount of water that an earthquake in a subduction zone would (think Sumatra 2004—>That was a 9.1M on a convergent boundary), it is also 95% terrestrial, meaning that even if it could displace that amount of water, there is no water to displace.  Near San Francisco, the fault briefly leaves land and goes into the sea, but even the most catastrophic quake would result in waves only 2-3m in height, a far cry from the monster wave that was eating oil tankers in the movie.

So there we have it folks: the Geologic Sin Meter broke during the making of this movie.  Still, this is actually a good movie, with a solid performance from The Rock, as well as Australian beauty Alexandra Daddario and Oscar-Winner Paul Giamatti.  The entertainment factor is high, and the special effects are excellent, even breathtaking.  If your goal is pure entertainment, which is typically mine when I watch a movie like this, then you will have come to the right place.  All other things being equal, I will watch this movie and enjoy it, though I will be forced to bury and hide my scientific BS detector.  Enjoy it folks!

Hiking and exploring in the outdoors, or any of our public lands, is a special experience.  Although it is possible to see these places yourself, hiring a guiding outfitter is a great idea.  For instance, guiding services provide logistical support, and plan everything for your best possible trip.  They provide a great safety net on the trail, and are trained in backcountry medicine. Above all, they provide a depth of knowledge of the region that turns a walk into a true adventure.

Canyons and Chefs provides all of the support you need, and pairs that with professional chefs and expert geologist/guides.  Our meals use fresh ingredients and are inspired by local farms, culture, and cuisine. We utilize a mobile professional kitchen as a backbone for cooking over the fire.  Furthermore, we provide top-of-the-line gear and passion for the places we explore. In conclusion, you can these wild places, but going with a guide can create an even more memorable experience.  Don’t be shy, and call us!